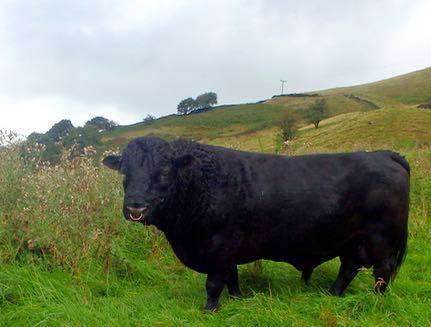 Well its bad news and good news. We were expecting Rhubarb to have her first calf about a month ago, it hasn’t happened. She did seem to be pregnant, but somewhere along the line she must have lost the calf, or maybe she was just joking us, and wasn’t at all. Or maybe she isn’t able to have a calf?

Alan Sutcliffe of Pextenement Farm (where the fab cheese comes from) advised that it was possible the cows were freemartins (part of a male/female twin, the female affected by the bull calf’s testosterone levels might be an inter-sex type and not fertile). That was a worry, because we’ve grown bit fond of Rhubarbio. What would we do? Find her a home as a pet? Train her as an oxen? Even more worser?

Well, the thing is, both cows spent the month of September with Brioche the Dexter bull, We like the idea of a crossbred cow, the Jersey genetics is very specialised for intensive milk production, and the milk is a bit super rich, not what everybody wants. The Dexter is a very ancient and un related breed of cow from the wet west of Ireland, bred from the Kerry, a multi purpose beastie with genetics from the Auroch, the wild original moo. The Jersey, from middle eastern origins, evolved from 1000 years of isolation on the channel islands as a specialist milker. So the mix is a true hybrid, tough vigorous eat anything and bullet proof.

Brioche is a good boy, he knows his job and he likes his work. One of the girls received his attentions the very minute he got in the field. I had thought it was Rhubarb, but hoped I’d got that wrong!

Alan has his ladies scanned regularly and offered to get ours done at the same time. At two months, a pregnancy should show on a scan. The vet has a scanner probe attached to her finger, and a very long glove,lots of lube, you know the rest!

And the great news is Rhubarb and Custard are BOTH in calf, so it’s a brace of Jersey/Dexters we’re expecting in mid June.
Lots of milking, lots of cheese to make, book your seats on the milking stool now!